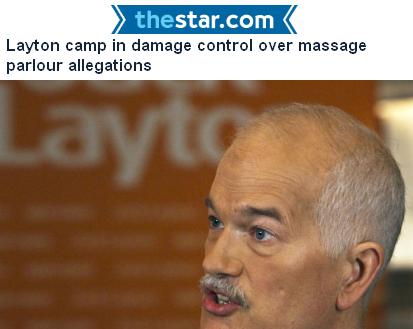 TORONTO - Jack Layton was found laying naked on a bed by Toronto Police at a suspected Chinatown bawdy house in 1996, a retired Toronto police officer told the Toronto Sun.

The stunning revelation about the current leader of the New Democratic Party comes days before the federal election at a time when his popularity is soaring.

When the policeman and his partner walked into a second-floor room at the Toronto massage parlour, they saw an attractive 5-foot-10 Asian woman who was in her mid-20s and the married, then-Metro councillor, lying on his back in bed.

Layton was cautioned by police and released without being charged.

"Sixteen years ago, my husband went for a massage at a massage clinic that is registered with the City of Toronto," Chow wrote. "He exercises regularly; he was and remains in great shape; and he needed a massage.

"I knew about this appointment, as I always do."

In a letter from his lawyer, Layton recalls "being advised by police at the time that he did nothing wrong."

What police say happened on Jan. 9, 1996, was recorded in the former cop's notebook, which was reviewed and photocopied by the Toronto Sun.

The former Asian crime unit officer, who requested anonymity, details a prior police raid on the "premise currently ID as a bawdy house" looking for underage Asian hookers and a subsequent follow-up visit to the two-storey brick storefront on Jan. 9.

At first the policemen didn't realize they were interviewing one of the best-known Toronto politicians who was married to Chow, also a Metro councillor and now the incumbent NDP MP for Trinity-Spadina.

The officer's notebook indicates he asked the suspected john: "Did you receive any sexual services?"

He replied: "No sir, I was just getting a shiatsu."

The cop: "Why did you have all your clothes off?"

The suspected john: No answer.

The cop: "Are you aware that there were sex acts being done here?"

The suspected john: "No sir."

His notes also claim he saw the "female dump wet Kleenex into garbage."

He's registered as 'John' and I thought he's a 'john.'" Layton's Christian name is John.

"I explained to him this was a bawdy house and then I asked him the silliest question, 'Are you any relation to the councillor, Jack Layton?' and ... he had that defeated look on his face and he said, 'We are one in the same,'" the ex-cop said.

The former officer said Layton, seemed quiet and mellow and denied that he knew it was a suspected bawdy house. The police had to decide what to do with the controversial councillor.

"To have arrested him and charged him would have served our egos a lot more. Layton was a thorn in the side of the police, siding with the anti-poverty movement in '96 or '97 ... Jack was anti-police," the ex-cop said.

"We looked at it and thought do we take advantage of this, or do we look at this like (he's) any other person, put it away and we hope this thing dies a slow death."

In the end, they came to the conclusion they shouldn't charge him.

"If we had barged in and he was engaged in a sex act and we had plainly saw it, then it would have been a different story."

The officers said police filled out a suspect investigation card that recorded his name, address, date of birth -- July 18, 1950 -- height and weight.

That information would be filed away by a civilian administrator for crime analysts to use in tracking criminals with particular attributes.

The former cop is surprised it took so long for the incident to become public.

"This stuff was never leaked out back then. The professionalism was outstanding. I thought this would have come out. This thing within the circle was so well known."

The policemen warned the councillor about the dangers of hanging out in suspected bawdy houses that could be run by Asian triads.

"I remembered lecturing him on a lot of these triads, they'd videotape the customers and extort them afterwards.

Jack went pale. I said to him you have to understand it's quite possible," he says.

"He came on a bicycle. I escorted him down and he went away on his bike."